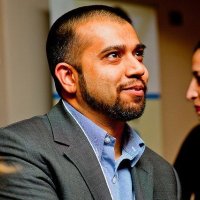 Mohammed Hashim is a labour organizer working for the Toronto and York Region Labour Council, and a driving force behind the National Council of Canadian Muslims and DawaNet. His groundbreaking work in political advocacy and public relations has been widely credited as framing a new narrative for Muslims in Canada. During the election, he voiced young Muslims’ issues by leading a team that held a national debate broadcast on TV, and livestreamed to 11 cities. After the election, he initiated “Stronger Together," a national political advocacy network for the Muslim community, which is mobilizing teams across the country to politically advocate from a unified platform.

Mohammed will share stories of organizing the GTA Muslim communities during the last federal election.
RSVP Spread the word Donate